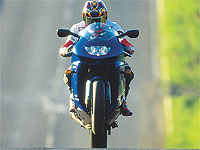 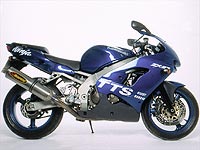 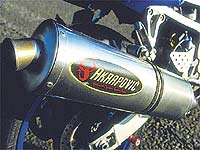 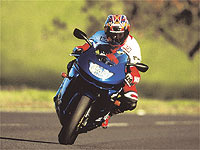 Kawasaki’s ZX-9R is a much admired sports bike. But it has started to lag behind the new breed of 1000cc superbikes. What’s really needed here is a ZX-10R: Enter TTS.

" It’s made it a GSX-R1000 beater, at least on power if not weight and handling, " he said. Suzuki has never issued an official claimed power figure for the GSX-R but we’ve dyno tested one that made 148bhp at the rear wheel, putting it 10bhp down on TTS’s ZX-10R.

And Albans reckons it also beats the GSX-R on torque. " It’s around 20 per cent up across the rev range, " he said.

Albans hasn’t speed tested the ZX-10R yet, but he’s confident the figures are enough to make it capable of stuffing a GSX-R1000 in a straight line.

" The ZX-9R has always had a good top speed because of its good aerodynamics, " he said. " So the ZX-10R should be very fast. "

Riding the ZX-10R Kawasaki should build

Finally, someone has done what Kawasaki hasn’t – made a bike that should be dubbed the ZX-10R.

Under the plastic is a bored-out version of the ZX-9R’s 900cc engine. It’s wet, and I’m worried the bike’s 158bhp – up from the standard 145bhp and 10bhp more than a GSX-R1000– might prove a bit of a handful. Oh, and it’s on brand new, shiney Metzeler Rennsports, which have such a small amount of tread on them they actually look like slicks from the sides.

I needn’t have worried. Anyone who’s had the chance to try out the GSX-R1000 knows it’s much more than a powerful engine. It’s also an amazingly useable engine. This is the same.

The next stretch of Tarmac looks much better. This is a heavily travelled road and the early morning rush which has just finished, has cleared the lanes of the worst crap. Time to give it a little bit more – but bearing in mind the cold rear tyre might spin with all that force acting on it.

Nope. Wind it on reasonably hard in first and the front pops up as the revs rise somewhere around the 5-6000rpm mark.

The power feeds in smoothly enough to allow the tyre to grip rather than just spin, and as I snick it into second gear the story repeats, this time a little higher up the revs. Second gear is the cog that would need strengthening on a production model, in fact. Not because it’s weak, but because wheelie merchants would probably prefer that as the pick-up gear, so it would take a lot more abuse than the rest of the box. That said, there’s enough power to pick it up in higher gears

Without the opportunity to run it side by side with the GSX-R1000 it’s hard to be 100 per cent sure which engine would win, but going on pure gut feeling, it seems like the " ZX-10R " would be the king of the traffic light GP. It provides a more urgent feeling than the Suzuki, but still keeps it controllable – a neat trick.

On open roads, the engine is ludicrously flexible. Go through the box to sixth and leave it there. Don’t bother to change down to overtake. Just roll it on and feel the power build as you sweep effortlessly by.

Or if the gap is a bit smaller, drop a cog or two and roll it on hard. Say goodbye to whole queues of cars in no time at all. .

Whether you ride in town, across continents or on track, this engine can deliver. It doesn’t snatch at you, it won’t flip you over backwards unless you ask it too, and it doesn’t mind bimbling around at low revs .

Kawasaki has already increased the capacity of the ZX-6R, and doing the same to the ZX-9R seems so obvious. But still Kawasaki continues down the 900cc route. Each year it finds more power and more torque, and the fastest of all the superbikes keeps getting faster.

Kawasaki’s history gives a clue. The firm’s most legendary bikes are the Z900 and the GPz900R. So you can imagine that turning its 900cc flagship sports bike into a 1000 could have long-serving Kawasaki designers committing hara-kiri with their technical pencils.

But TTS has no such qualms. So when the owner of this ZX-9R, Chris Dunn, said he wanted a bit more go for track days and continental tours, the firm was happy to oblige. It will do the same for you, too, if you turn up with a bike and 1850 smackers.

The capacity is up to 998cc. The compression has been upped to 12.8:1, which may seem high, but is low enough to let it run on super unleaded. And with some production bikes running compression at around 12.2:1, it’s not wildly out of the " real " world. Kawasaki could even drop the compression a notch without robbing the engine of a great deal of its impressive propulsion.

The Akropovic exhaust system may not be legal, but it isn’t stupidly loud – it makes the sort of deep rumble you’d expect from a tuned Kawasaki. And with the quality of stock pipes as high as they are now, Kawasaki shouldn’t lose much power by running a road-legal pipe.

And in a straight head-to-head power battle with the likes of the GSX-R, Kawasaki would have plenty to play with. Considering it might want a few more miles on the new pistons and bores to really loosen up, this bike should be capable of more than its current 158bhp.

Handling, however, is where the Kawasaki really has to catch up with the Suzuki. This engine proves the ZX-9R has room to grow into a GSX-R1000-beater. Can Kawasaki do the same to the chassis?